In nascent spine surgery procedures, it was difficult to detect an iatrogenic neurological injury until the patient woke up from anaesthesia. Recently there is a surge in usage of neurophysiological monitoring during procedures at cord level especially in deformity correction among spine surgeons. The purpose of IONM (Intraoperative Neuromonitoring) is to reduce the risk to the patient of iatrogenic damage to the Spinal Cord, and/or to provide functional guidance to the surgeon and anesthesiologist. Neuromonitoring is helpful in spine surgeries to detect injury in conditions where one would expect a neurological deterioration during positioning of the patient, during operative manoeuvres and also when corrections are attempted during kyphosis or scoliosis surgeries. The most common ones are SSEP (somatosensory evoked potential), transcranial electric motor evoked potentials (TcMEPs), and electromyography (EMG).

Spinal cord evoked potentials: Electrical stimulation was provoked on the dorsal spinal cord from an epidural electrode. The spinal cord evoked potentials (SCEP) correspond to the summation of neural activities originating from the ascending and descending tracts and neurons near the recording electrode. In a practical setting, SCEP cannot provide sufficient information about motor-related function because sensory-related potentials, which are large in amplitude, mask motor-related potentials.
Somatosensory evoked potentials: Somatosensory evoked potentials (SEPs) assess the functional integrity of sensory pathways from the peripheral nerve, through the dorsal column and to the sensory cortex and can be applied for monitoring it consistently. This potential indicates activities from the dorsal column such as the sensory tract.Electrodes are placed on the skin over a nerve which runs close to the surface and a nerve action potential is generated which travels along the course to the cortex. By shifting the stimulus site, one can identify the laterality of dorsal column lesions.

-The posterior tibial nerve at the ankle

-The median nerve at the wrist

Recording site must be above the level of surgery
Cervical- C2, C5, C7
The cortex of brain – differing areas dependant upon which limb is stimulated
Spinal cord – using epidural electrodes placed on the surface of the spinal cord

The amplitude od SSEP vary naturally from one recording to the next, therefore many departments have adopted on of 50% amplitude reduction as a significant change, before
Motor evoked potentials

Peripheral responses are recorded from several muscles in the hand, legs, and foot following electrical stimulation of the cerebral cortex. This allows the motor pathway in the spinal cord to be monitored, thus giving an indication of the integrity of the motor tracts of the spinal cord. Two electrodes are applied over the motor cortex on the right and left hemispheres. These electrodes then act as stimulators. The recording electrodes are placed over the surface of a muscle or subdermally. Muscle group typically recorded include:

ANESTHETIC CONSIDERATIONS:
Both SSEP and MEPs are affected by various pharmacological and physiological factors. Any drug or physical parameter that influences electrical conduction along an axon may alter the evoked potential waveform. In general, the longer with more synapses tracts are, the more sensitive they are. Furthermore, a greater number of pulses will be needed for lower extremity
recordings compared with upper extremity sites because it is easier to obtain signals from the upper extremity than from the lower extremity. This is because the hand area occupies a larger representation on the motor cortex[21]. Inhaled anesthetics reduce the amplitude and increase latency, while intravenous anesthetics have the same effect but to a lesser degree. Halogenated or nitrous oxide-based agents influence SSEP amplitude and latency. MEPs are generally more sensitive to anesthetics than SSEPs. Total intravenous anesthesia without neuromuscular blockade is material to muscle MEPs to allow CMAP monitoring. Typically, induction with short-acting muscle relaxants, a continuous infusion of propofol and fentanyl and low level nitrous oxide use (not exceeding 50% by volume) are mandatory for MEP monitoring. In our institute, when we need IOM for the surgery, anesthesia is maintained with a continuous infusion of propofol (10 mg/kg per hour) and remifentanil (0.25 mg/kg per minute). At induction, a single bolus of non-depolarizing short acting muscle relaxant (rocuronium) is given to facilitate tracheal intubation and ventilation. The level of neuromuscular block is monitored by recording the CMAP to a train of 4 stimuli.

ELECTROMYOGRAPHY:
Spontaneous or free-running electromyography (EMG) is widely applied to monitor selective nerve root function during spinal cord surgery. Unlike SEP and SSEP data, EMG is “real-time” recording from peripheral musculature. Spontaneous EMG can help to prevent postoperative radiculopathy during spinal instrumentation surgery, including pedicle screw placement. This technique does not require stimulation and can be recorded continuously from preselected muscle groups based on the nerve roots at risk. At baseline, no muscle activity is recorded from an intact nerve root. Surgical manipulations such as pulling, stretching or compression of nerves provokes spikes or bursts of activity termed neurotonic discharges, resulting in activity in the corresponding innervated muscle(s). Spontaneous EMG is quite sensitive to irritation of the nerve root, such as retraction of spinal cord or nerve root, saline irrigation and manipulation during surgery. However, false spontaneous EMG activation commonly occurs during irrigation with cold water, cauterization and use of a high-speed drill because it is sensitive to temperature changes.


ACTIONS TO RECOVER DETERIORATED MEP:
There are some procedures useful for promoting the recovery of deteriorated or lost MEPs during spinal surgery. First, transient stopping the surgical manipulations immediately after MEP and observation may recover MEP spontaneously. Second, irrigation of the surgical field with warm saline solution generally removes irritating blood products and metabolites. It is believed that accumulated extracellular potassium which is derived from local tissue damage by surgery acts as a strong axonal blocking agent. Third, local application of papaverine and increasing the mean arterial pressure (MAP) more than 90 mmHg can facilitate local perfusion to resist local ischemia. Sustained hypotension may affect MEPs and may result in an unfavorable postoperative outcome. Temporary moderate elevation of MAP may restore blood flow and may lead to improving both D-waves and muscle MEPs successfully if ischemia due to insufficient MAP is the primary cause. Fourth, when dissection in a particular location results in MEP changes, the resection at a different site can proceed without further aggravation. Fifth, increasing body temperature also may help recover MEPs because deep hypothermia obliterates muscle MEPs. Sixth, when all the previous methods have failed to regain MEP, applied correction is reduced or anchoring hardware removed in case of the correction of the spinal deformity. If there is still no significant signal recovery, a steroid bolus (methylprednisolone or dexamethasone) could be considered. Finally, if there is no noticeable neurophysiological improvement in response to all methods described above, consider removing the spinal implant or discontinuing tumor resection.

IONM IN PRACTICE:
For many years, only SEPs were monitored during spinal cord surgeries before MEP techniques were developed. Since the multipulse technique was introduced in the mid-1990s, combined muscle MEP and SEP monitoring have been routinely used intraoperatively in various spinal operations, including from deformity correction to intramedullary cord tumors. Many authors have reported that combined SEP/MEP monitoring provided higher sensitivity and higher positive/negative predictive values than single-modality monitoring techniques and that optimal monitoring requires both SEPs and MEPs.

The reliability of intraoperative MEP to identify impending motor deficits has been improved, mainly as a result of accumulated knowledge interpreting the MEP changes. Monitoring muscle MEPs became the gold standard due to their increased sensitivity and the importance of motor function. It has been believed most widely that MEP recordings are stable if changes were less than 50% in amplitude and less than 10% in latency. However, there is no definite alarm point. Various different alarm points have been reported. From a surgical viewpoint, the 50% criterion could have the effect that the surgical correction of the deformity is performed incompletely or tumor resection is forsaken too early and the 80% criterion that the operation proceeded too aggressively. The benefit of more sensitive MEP criteria and the risk of stopping resection too early should be always considered in parallel. This is important especially for tumors of which the most important prognostic factor is complete resection, such as spinal cord ependymomas.

Some authors have attempted to establish a more sensitive and specific warning criteria recently. They recommend an alarm point of a 70% decrease in amplitude for routine spinal cord monitoring, particularly during surgery for spinal deformity, ossification of posterior longitudinal ligament and extramedullary spinal cord tumor, but not in cases of intramedullary spinal cord tumor. Different MEP methods and warning criteria still exist (muscle MEP, D-wave, absence/presence criteria, amplitude criteria and morphology criteria, etc.) and neither definite monitoring method nor definite warning criteria have been established. Future study should establish a more confident and accurate IOM method or criteria which prosecutes an aggressive tumor removal while preserving function of the spinal cord.

Reliable IONM enables surgeons to perform more difficult and challenging surgical procedures to the spine and spinal cord safely. Its role is to accurately identify the topography of neural structures and to avoid surgical insults by giving real-time alarms to the surgical team so that there is a response immediately. The role of IONM is increasing not only in deformity correction and intramedullary tumors but also in various spinal surgeries. It is well known that a rapid decompression of cervical medulla or cervical cord could result in neurological deficits such as C5 palsy, paresis or even plegia. It is possible to have a stretching of the lumbar roots during the reduction of the high dysplastic lumbar spondylolisthesis. IONM can help the surgical team accomplish a safe and successful outcome in spinal surgery which affects the spinal cord or spinal roots directly or indirectly. Multimodal IOM is a useful method to prevent spinal cord injury during neck positioning in cervical spine surgical procedures. It should not only be considered for detecting intra-operative warnings but also during positioning].

CONCLUSION:
Spinal surgeons should understand the concept of the monitoring techniques and interpret monitoring records adequately to use IONM for decision making during the surgery for safe surgery, favorable surgical outcome and the surgeon’s medicolegal safer
Gallery 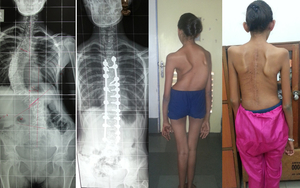 CASE OF SCOLIOSIS OPERATED WITH HELP OF NEUROMONITORING 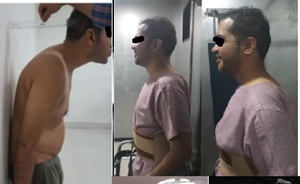 CASE OF ANKYLOSING SPONDYLITIS WITH KYPHOSIS OPERATED WITH HELP OF NEUROMONITORING
Did you find this topic helpful?  Yes   No
View All Topics
×
prev next
prev next
?
Ask Question
SmartSite created on AboutMyClinic.com
Site-Help | Disclaimer
Disclaimer: The information provided here should not be used during any medical emergency or for the diagnosis or treatment of any medical condition. The information is provided solely for educational purpose and should not be considered a substitute for medical advice.