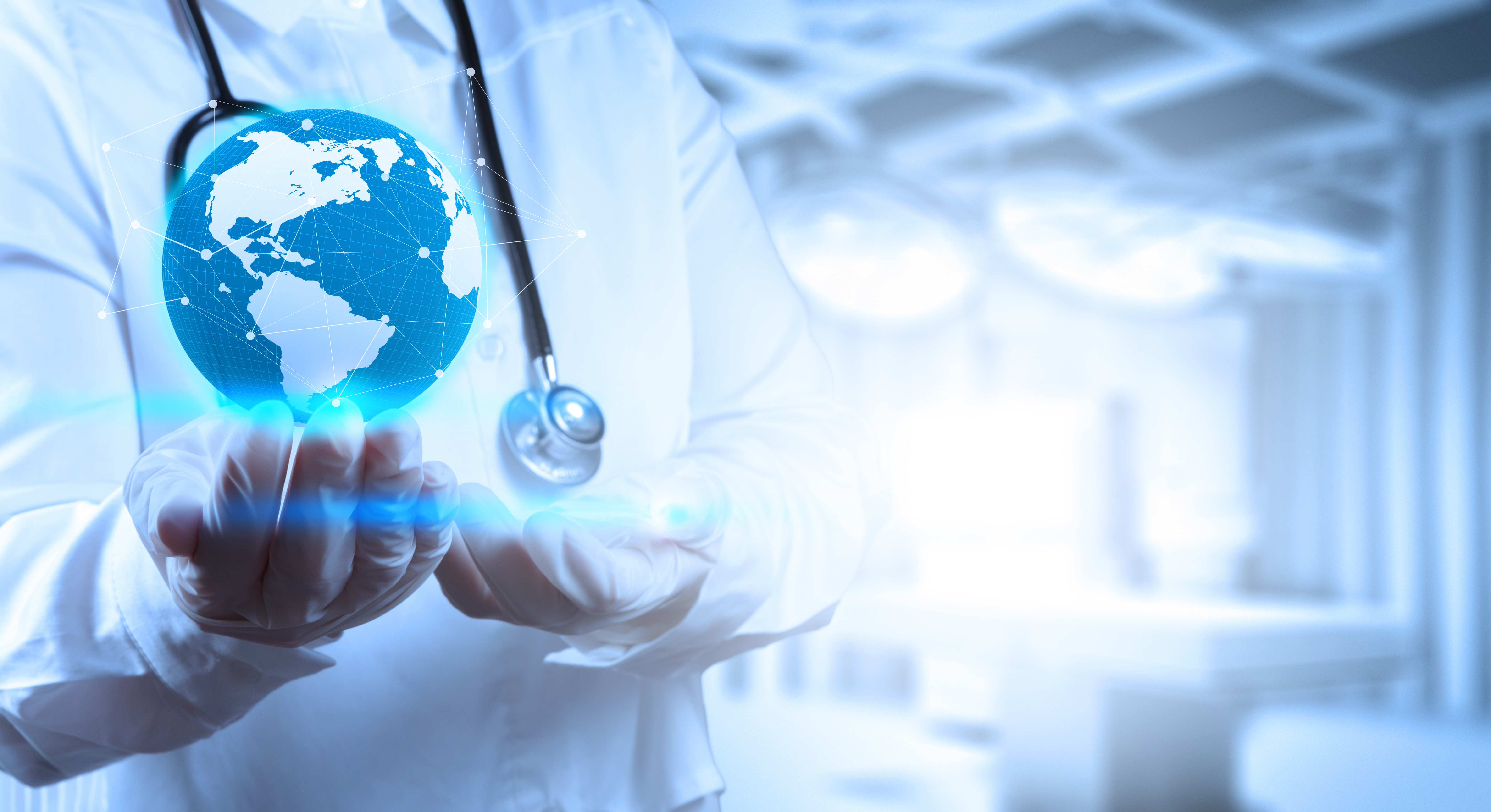 Sancheti Hospital to have a First LATEST O ARM(S8) ,Navigation, Neuromonitoring system in Pune Technology is changing the status quo everywhere and healthcare is no exception to it. Recently, In order to serve the patient best and for best outcome Sancheti Hospital has become a first hospital in Pune to have a Latest O ARM(S8) ,Navigation, Neuromonitoring system.

Following its vision of being the world leaders in providing state-of-the art orthopedic services.
and to reach out to the underprivileged and economically challenged patients and to provide innovative healthcare solutions to them, Sancheti Hospital and teams of erudite doctors always experiment with the technology which gives the best outcome.
spinesurgeonpune
Read More
Share
Facebook WhatsApp 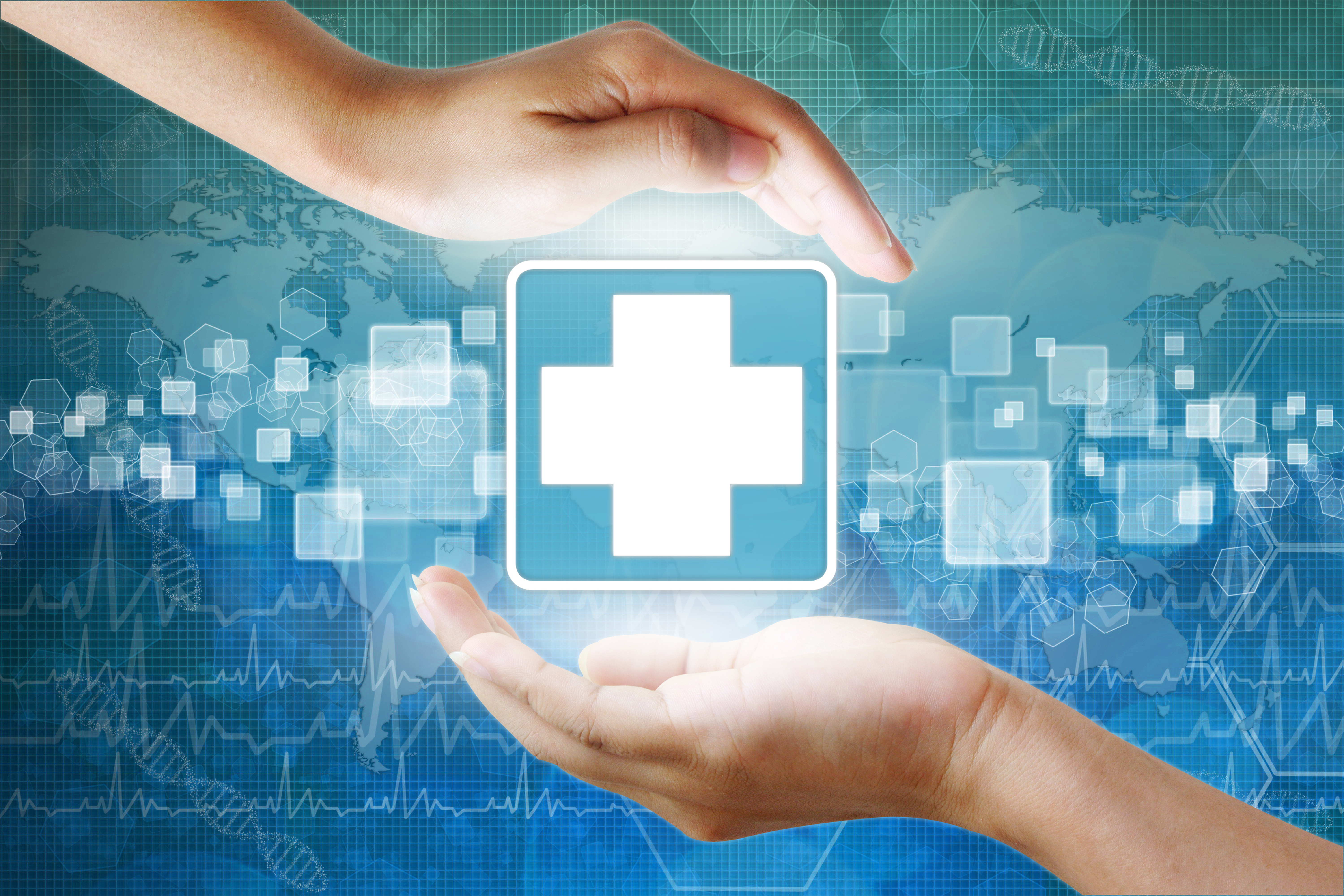 The 80-year-old gentleman who was bedridden for a long time made to walk within 2 hours of vertebroplasty procedure. Vertebroplasty is putting bone cement in the vertebral body using the minimally invasive technique.

If you are a patient or patient\'s relative and seek more information on Vertebroplasty, send an inquiry or ask your specific question directly to Dr. Ajay Kothari, the best spine surgeon in Pune. Alternatively, you can book an appointment for a face-to-face consultation. 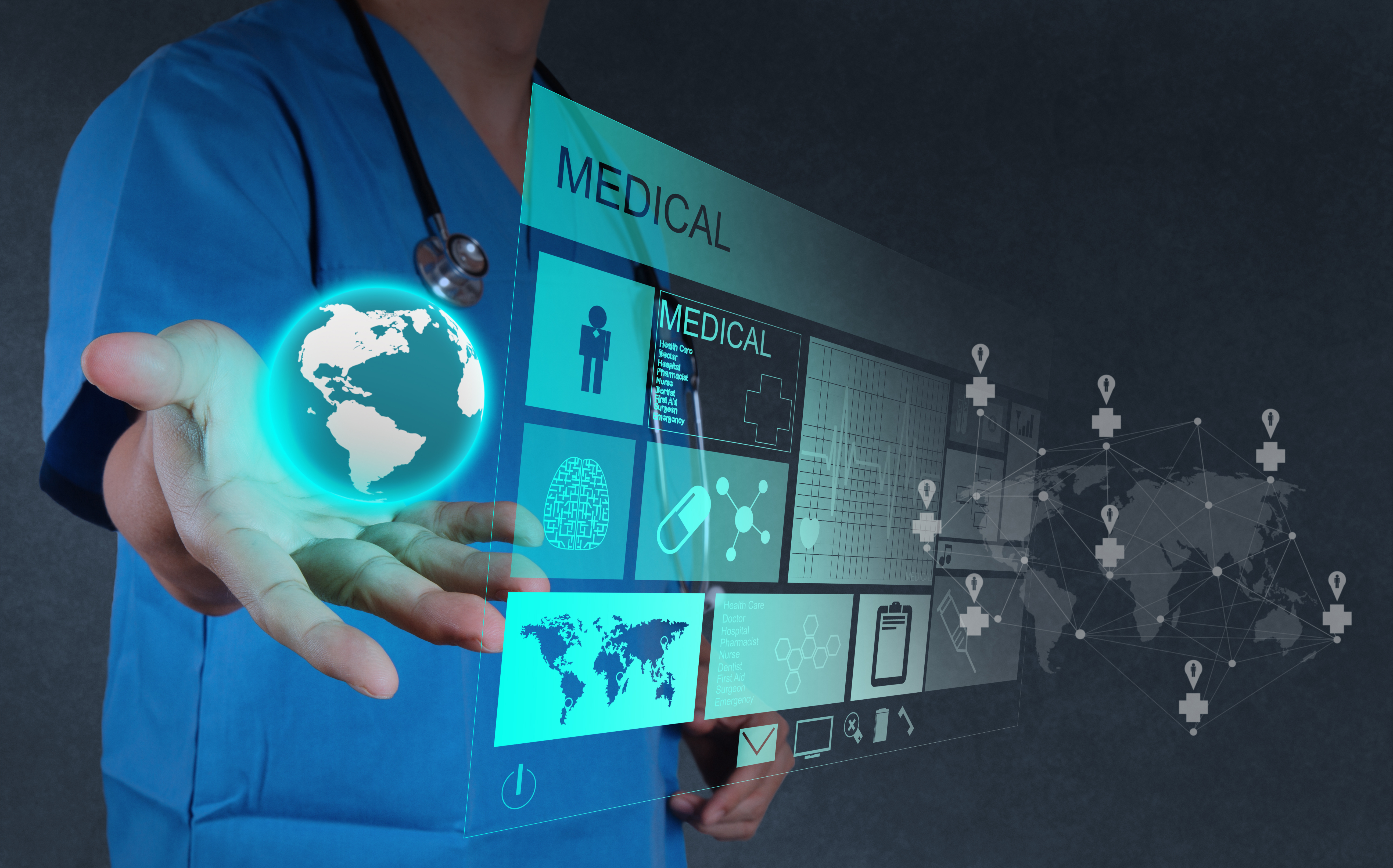 Young college going girl had significant problems in the back and leg secondary to high-grade spondylolisthesis. Before she was diagnosed she was taking the pain killers, after a while the condition got severe. Then she consulted with Dr. Ajay Kothari at Sancheti Hospital.

Dr. Ajay Kothari says, these problems if ignored can lead to serious concerns hence it is advised to take a Doctors opinion.

If you are a patient or patient\'s relative and seek more information on Vertebroplasty, send an inquiry or ask your specific question directly to Dr. Ajay Kothari, the best spine surgeon in Pune. Alternatively, you can book an appointment for a face-to-face consultation.

Recently a 78 yrs old Gentleman Brigadier Agarwal underwent spinal fusion procedure at the Sancheti hospital by Dr. Ajay Kothari.
Spinal fusion, also called spondylodesis or spondylosyndesis, is a neurosurgical or orthopedic surgical technique that joins two or more vertebrae. This procedure can be performed at any level in the spine and prevents any movement between the fused vertebrae.
Brigadier Devender Agarwal was having severe back pain since last year. After the treatment, he began to walk within 3 Weeks and after 3 months he resumed his life with full spirit. Quality of life has become a player.

If you are a patient or patient\'s relative and seek more information on Spinal Fusion, send an inquiry or ask your specific question directly to Dr. Ajay Kothari, the best spine surgeon in Pune. Alternatively, you can book an appointment for a face-to-face consultation. 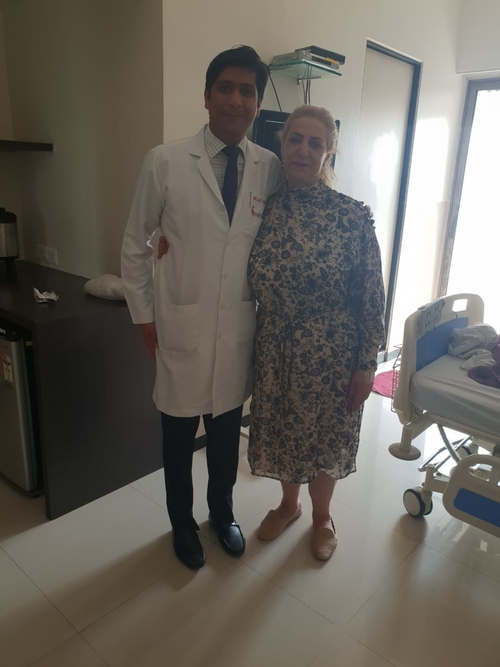 An International patient from Iran was advised surgery for her Lumbar Spine. She visited Pune especially to consult with Dr Ajay Kothari, Spine Surgeon and Unit Head at Sancheti hospital, Pune.
She was treated Non surgically under the guidance of Dr Ajay Kothari with Lumbar pain block(Lumbar Selective Nerve Root Block Injection). She got completely better and is back to Iran and managing complete household work happily without any pain & complaints. She also lost around 15kg weight as she could exercise well after the treatment. 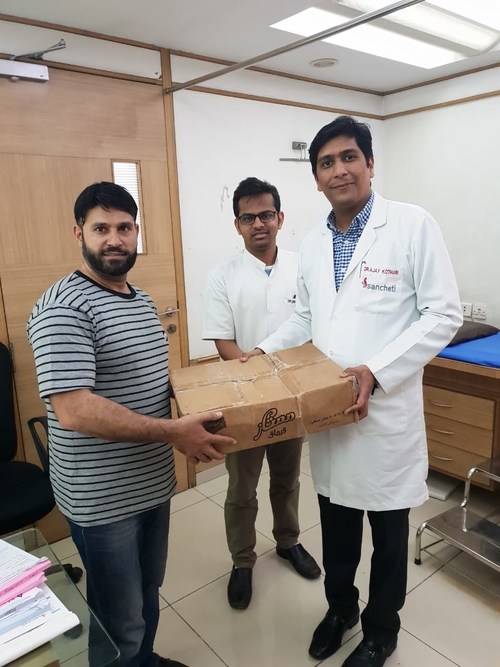 A Patient from Afghanistan was advised to major surgery for Lumbar Spine in his country. Though he looked for the other options and that is how he landed up in India to meet Dr. Ajay Kothari, Consultant Spine Surgeon and unit head at Sancheti Hospital. Under the guidance of Dr. Ajay, He was treated non surgically with Pain Block Treatment (Lumbar Facet and Nerve Root Block Injection).

He got completely recovered and after his follow up at 6 months he came back to show his gratitude towards Dr. Kothari with a box full of dry fruits as a token of appreciation. The Smile and relief of patients always motivated him to the best - says Dr. Ajay Kothari. 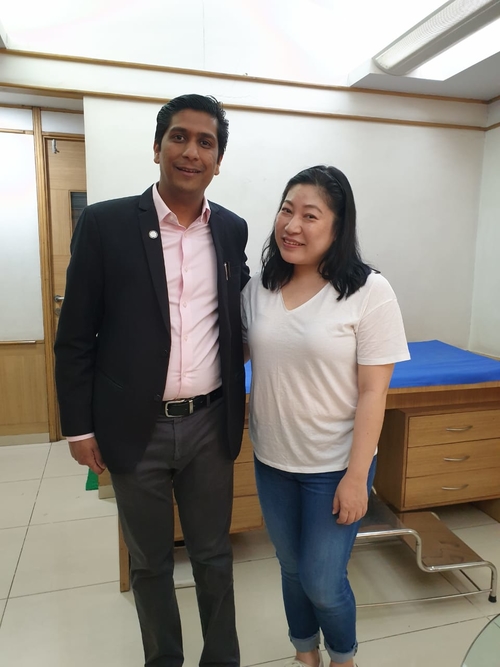 International Patient Suffering from Cervical Disc Prolapse treated Non Surgically An International Patient from Dubai has visited Dr. Ajay Kothari, Spine Surgeon & Unit Head at Sancheti Hospital, Pune. She had
a Cervical Disc Prolapse - it is diagnosed when the inner core of a disc in the neck herniates or leaks out of the disc, and presses on an adjacent nerve root. It usually develops in the 30-to-50-year-old age group. While a cervical disc may originate from some sort of trauma or neck injury, the symptoms commonly start spontaneously.

She was in Excruciating Pain. Dr. Kothari brings hope and happiness to her life while treating her non surgically with medications, physiotherapy, and Cervical Pain Block(selective nerve root block injection).

Within 10 days tone, she recovered completely and was back to Dubai and is successfully and comfortably doing her business
spinesurgeonpune
Read More
Share
Facebook WhatsApp 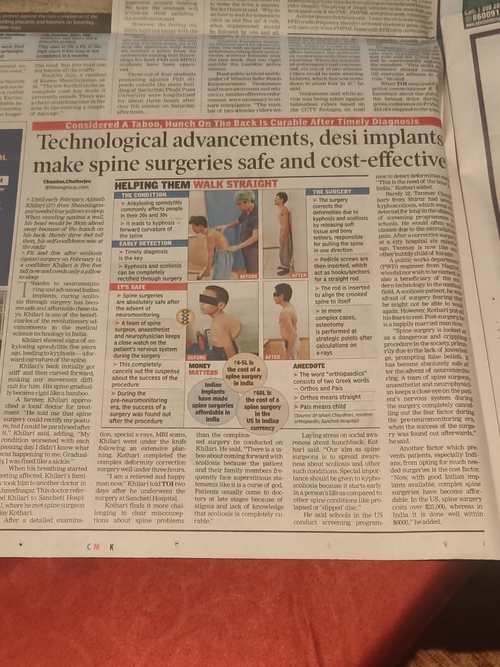 Technological advancements, desi implants make spine surgeries safe and cost-effective Until early February, Ajinath Khilari (27) from Shanisingnapur needed four pillows to sleep. When standing against a wall, his head would be 30cm ahead away because of the hunch on his back. Barely three feet tall then, his self-confidence was at the nadir.
After a detailed examination, special x-rays, MRI scans, Khilari went under the knife following an extensive planning. Kothari completed the complex deformity correction surgery well under three hours. “I am a relieved and happy man now,” Khilari told TOI two days after he underwent the surgery at Sancheti Hospital. Kothari finds it more challenging to clear misconceptions about spine problems than the complicated surgery he conducted on Khilari. He said, “There is a taboo about coming forward with scoliosis because the patient and their family members frequently face superstitious statements like it is a curse of god. Patients usually come to doctors at late stages because of stigma and lack of knowledge that scoliosis is completely curable.”
spinesurgeonpune
Read More
Share
Facebook WhatsApp 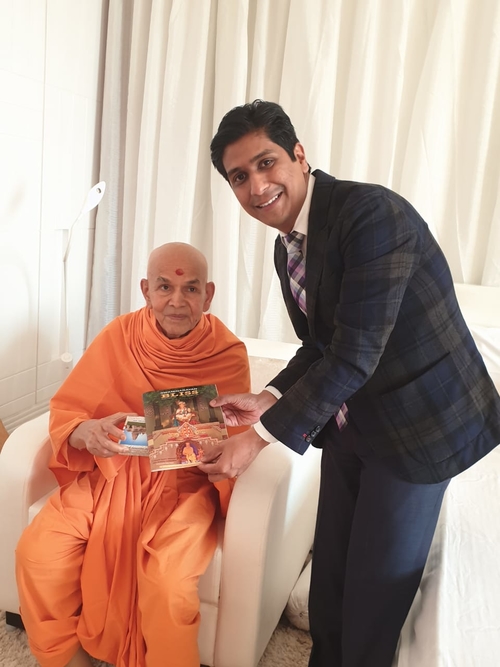 ParamPujya Mahant Swami Maharaj It was an honour to treat the Global patriarch of SWAMINARAYAN COMMUNITY, ParamPujya Mahant swami maharaj..
He is 84 years old but has a magnetic personality, sharp acumen and has a noble heart..
May God give him long life and good health.
spinesurgeonpune
Read More
Share
Facebook WhatsApp

Non Surgical Pain Block treatment Lady had continuous shooting pain in her left leg due to which she was not able to do her day to day activities like walking was advised surgery..however Dr Ajay kothari treated her non surgically with selective nerve root block and advanced physio now completely recovered better of to do her daily chores independently.
spinesurgeonpune
Read More
Share
Facebook WhatsApp 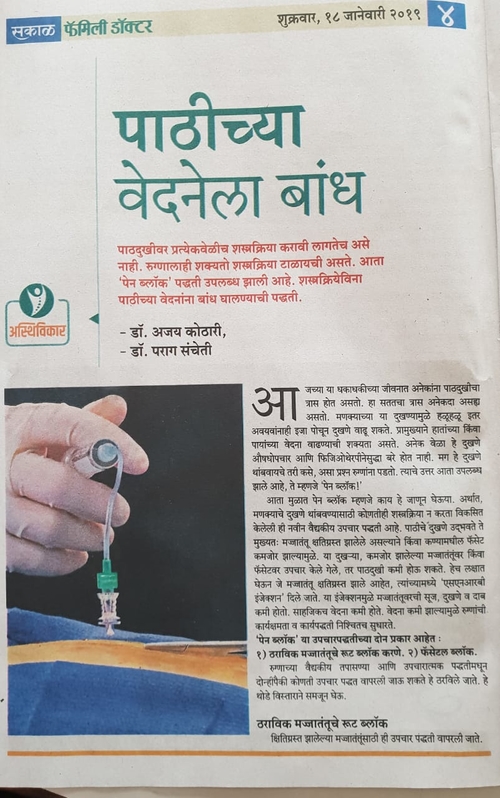